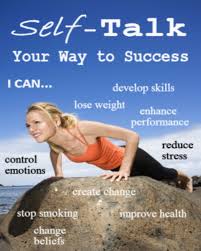 I have mentioned self-talk before, but I have not really explained what it was, although it seems like it might be pretty self-explanatory. Self-talk refers to thoughts and words that a wrestler says to himself/herself, which usually is done in the mind and is meant to enhance focus.

Self-talk can be as simple as one word or it can be a short phrase, and is a cue for a wrestler to do a certain thing. An example could be, “Move your feet, get to your ties.” As you can see, it’s not very complex, but is a way to narrow your focus. Self-talk can be done at numerous times, such as while you are at practice, before a competition, during a match, or just sitting around. You might have different words or phrases to use for different times as well. Careful though because self-talk can be both positive and negative. If you catch yourself using negative self-talk, like “I can’t do it” or I’m no good enough,” you need to replace it with something positive. Say something to yourself that makes you believe that you can do it or that you are good enough to do something.

Self-talk is a great tool to use when trying to get your mind right. You probably have done this before, and maybe you did it without knowing, but now you can knowingly practice by narrowing your focus, creating a word or phrase, and keeping it positive.