This week is about goals and finding something tangible that you can focus on during the hard times. I want you to find something tangible that you can set your sights on. Most people think of goals as being 500 on the year or qualifying for states. If you find something you can picture it will become more real and serve as your fire. If your parents, friends and coaches don’t think you’re a little bit crazy you may just need to reach a bit further. After my freshman year at Fargo I went 2-2 and I was a 2nd year cadet. It is a big step up from cadets to juniors, but I decided that I wanted to win Fargo the next year. I found out who was #1 at my weight and it ended up being Mark Perry, Asics high school wrestler of the year and national champion. I took the USA wrestling magazine and cut his photo and had it taped to my bed. I set out an almost impossible training regiment because I knew that I would have to train so much harder than I had in the past. I hadn’t qualified for states or placed at any national tournaments. Anyone I told definitely thought I was a bit crazy including my brother. Being able to see Mark training in my head it made it so much easier to get up for early mornings, late nights and say no to distractions that came in the way. Mark unfortunately broke his arm and could not wrestle. I went on to take 4th at the weight, beating the eventual champ, but being 2nd in the 3 way tie in my pool. Even though I didn’t get to beat Mark, it was a breakthrough in my wrestling career as far as training went. Find something worth while and set your sights on it… 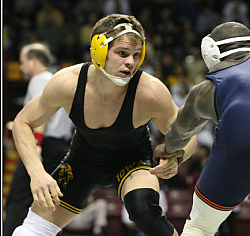 The state camp at Merrill was great and it’s pretty amazing to think that a lot of the coaches still involved have been giving knowledge and time to kids since I was training for Fargo my freshman year in high school. Needless to say it’s nice to be able to aid in the vision of Wisconsin being crowned team champions at Fargo.

It was great to be in an atmosphere where there was a purpose. Almost all of the kids were there with intent. Wisconsin is definitely headed in the right direction. Thanks to the coaches that set it up and the kids that came.